This is the back side of the abandoned building in front of the Econo Lodge.

The lady at the front desk was so uninterested in being there she could barely be bothered to answer the one question that we had, and once we opened the door to the room we were hit with the surprisingly strong smell of fresh cigarette smoke. We burned some incense matches at night that we had bought in Salem, but when we woke up in the morning the smell was back with such a fury we both had headaches and frogs in our throats. Needless to say, we were in a hurry to get out of there in the morning.

We decided to grab breakfast before we went back home, and came across a little place known as the Portside Diner. Five minute wait, great service, and (surprise!) award winning food! Even the coffee was delicious!! The diner has a little bit of a history in the area, too. It was brought to the spot more than 50 years ago (in 1959) but was started in 1948 as Cape Ann Grill, and has been in operation for almost 60 years. Pretty impressive for a little box car diner on a street corner.

Danvers was known as Salem Village when it was settled in 1636 and was re-named in 1752 after Sir Danvers Osborn, an English nobleman who was revered by the colonists for ensuring they received supplies, and regulation of the local trade, among other things. He became the Royal Governor of the Province of New York in July of 1753, and in October of the same year his dead body was found in the garden of his home showing evidence of strangulation. The man who replaced him as acting governor upon his death, James De Lancey, suggested that he had committed suicide due to grief over his wife’s death during childbirth ten years prior.

Additionally, one of the victims of the Salem witch trials, Rebecca Nurse, lived in Danvers and her homestead can still be visited today.

After breakfast at the Portside Diner we decided to head to Lynn, Mass, less than half an hour away. Lynn sits on the Atlantic Ocean, only 10 minutes from downtown Boston, which means great views of the ocean and the Boston skyline are visible around every turn.

Lynn’s proximity to Boston reminds me of a piece of Salem history. In 1877 Alexander Graham Bell demonstrated how “long distance” phone calls worked, placing a call from Salem to The Boston Globe in Boston – a distance of only sixteen miles. According to my ghost tour guide from Salem, in a strange turn of events, some of the people helping with the demo were electrocuted and died, which adds to Salem’s haunted history. Thank you Alexander Graham Bell for your contribution to society, history, and Salem’s haunted history!

We decided to grab some lunch at a little place called the Porthole back in Lynn. This restaurant has great character, great views, great service, the best fish and chips I’ve had in a long time, and a delicious chocolate and peppermint schnapps dessert drink. I wasn’t surprised when I learned that they’ve been in business for over 40 years!! 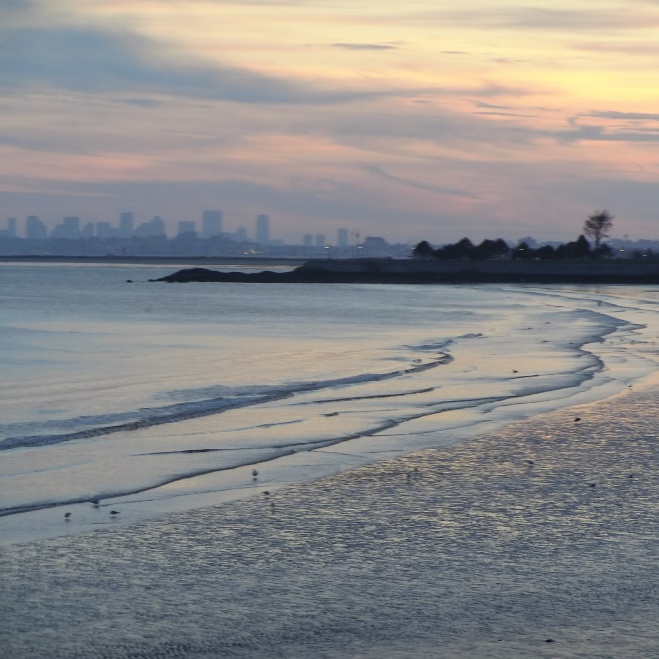 Approximately 10 miles away from Boston, Lynn is actually a part of the Greater Boston area. The English settled there in 1629, not long after the arrival of the Mayflower at Plymouth in 1620. Lynn became a center for shoe-making starting in 1635 and supplied the boots worn by Continental Army soldiers during the Revolutionary War. Shoe-making drove the city’s growth all the way up to 1981 when the last shoe factory closed and, interestingly, that same year the city was engulfed by an inferno that destroyed several former shoe factories and seventeen other downtown buildings. The importance of shoe-making to the city’s growth is reflected in the city’s seal, which includes the image of a colonial boot.

Lynn became a popular summer resort location in the mid 1900’s with the unveiling of Lynn Shore Drive in 1910. There was a lot of new development along Lynn’s coastline during this time, and many of the buildings constructed then are now part of the Diamond Historic District, which is listed on the National Register of historic places.

Fun fact: Lynn was long referred to as a “city of sin.” Lynn’s reputation for crime and vice gave rise to a taunting rhyme about it: “Lynn, Lynn, the city of sin, you’ll never come out the way you went in, what looks like gold is really tin, if you ask for water they’ll give you gin, the girls say ‘no’ but they’ll give in, Lynn, Lynn, the city of sin, if you ain’t bad, you can’t get in.” In order to counter its reputation as “the city of sin,” Lynn launched a “City Of Firsts” advertising campaign in the early 1990s, which boasts some interesting facts like: in 1875 a Lynn resident named Lydia Pinkham became the first woman to use her image to sell a product.

View all posts by elanastraveladventuresblog